We deal with Giant Hogweed problems on both private land and public land we own (e.g. parks, nature reserves, allotments, playgrounds) 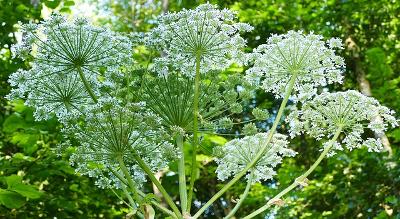 What is Giant Hogweed?

Hogweed is an invasive and potentially harmful plant species which spreads quickly and takes over other plants. It is a fast growing weed and can reach over 3 meters in height.

*Don't touch Giant Hogweed as the sap can cause painful burns, make your skin sensitive to strong sunlight and cause blindness if in contact with eyes. If you're affected by it, wash the area with soapy water and contact your doctor for advice.

If the problem is on private land, we will inspect the issue as soon as we can. Given the public health risk the weed poses, we may still take enforcement action even if the weed is not spreading to make sure the issue is dealt with as quickly as possible.

If the problem is on public land we own, we will inspect the issue as soon as we can and start the treatment process to remove the weed.

To report a problem complete the following online form:

Once you have reported the problem, you will be contacted by one of our officers to acknowledge your complaint before we investigate it further.

For problems on public land we own, our Parks Team will investigate the complaint and take the appropriate steps to resolve the issue.

For problems on private land, our Environmental Protection Team will contact the owner to investigate the complaint. If the landowner does not agree to control the weed, we will use enforcement powers to ensure the issue gets resolved.

Tips for controlling Hogweed on your land

If the weed is growing on your land, you should aim to treat the plant as early as possible to stop it from spreading and becoming a problem to neighbouring land.

Due to the dangerous nature of the plant we do not recommend you treat it yourself. We advise you use a specialist company, as they will be skilled at control and can dispose of the plant waste safely.

Please note: you should never dispose of Hogweed in your household, business or green waste collection.