We deal with Japanese Knotweed problems on both private land and public land we own (e.g. parks, nature reserves, allotments, playgrounds). 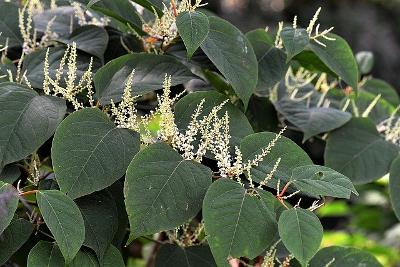 What is Japanese Knotweed?

Japanese Knotweed is an invasive plant species which spreads quickly and takes over other plants. It is the fastest growing weed in the UK and can reach up to 3 meters tall.

The weed can grow almost anywhere with problems including:

Our enforcement power to resolve Japanese Knotweed problems depends very much on whether or not the weed is spreading.

If the weed is not spreading

If the weed is not spreading onto neighbouring land, it is not illegal for landowners to have it on their land and they do not need to notify anyone, remove or treat it.

In this case, we suggest that you contact the land owner directly to ask them to treat the issue and stop it from spreading.

If the weed is spreading

If the weed is spreading on to neighbouring land, you may report the problem to us, as this may be considered a nuisance and we would have the power to make sure the landowner deals with the issue.

If the problem is on public land we own, we will inspect the issue as soon as we can and start the treatment process to remove the weed.

To report a problem complete the following online form:

Once you have reported the problem, you will be contacted by one of our officers to acknowledge your complaint before we investigate it further.

For problems on private land, our Environmental Protection Team will contact the owner to investigate the complaint. If the landowner does not agree to controlling the weed, we will use enforcement powers to ensure the issue gets resolved.

For problems on public land that we own, our Parks Team will investigate the complaint and take the appropriate steps to resolve the issue.

Please note: The treatment of Knotweed is not a fast process and may take up to 3 years to resolve the problem.

Tips for controlling Knotweed on your land

If the weed is growing on your land, you should aim to treat the plant as early as possible to stop it from spreading and becoming a problem to neighbouring land.

However, professional contractors will have access to more powerful chemicals that may reduce this period by half.

Please note: you should never dispose of Japanese Knotweed in your household, business or green waste collection.